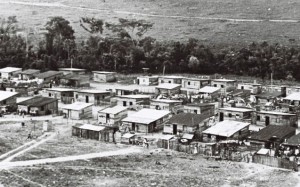 Picture taken around 1955 form the first settlement in Brasília

Júlia dos  Santos Baptista was born and raised in Brasília, the capital of Brazil. As a young girl, her drawings became popular collectors items amongst the other children. She currently lives and works in The Netherlands. Her work has been exhibited and is sold in various countries around the globe.

Júlia’s early paintings express pure and joyful images in bright colors. Many reflect her tender memories of her youth in Brasília. At the time, Brasília was a new city, attracting people from all around the country who hoped to find a new home and build a new future. These newcomers were optimistic and celebrated this opportunity for a better life, while working hard.  Júlia’s later works reflect on universal themes such as urbanization and cultural roots, the dialogue between art and purpose, and teenage motherhood, for example.

For exemple the Collection Brasília is inspired by the architectural landscapes of the city, while in dialogue with the varied cultural roots of its inhabitants. Many countries with big new cities such as India, Russia and China face similar dialogues. Colours and themes from Brasilia’s daily life reflect on the richness of the natural and cultural wealth its citizen’s share. But the colours also reflect the local landscape: the ochre and greens of the natural environment; the red tones of the soil; the deep blue of the sky over Brasilia; the grey of concrete.
The collection Brasilia was selected by the ECT, the Brazilian postal company, to illustrate 6 million national stamps. One painting of the collection Brasilia also appears in Brazilian schoolbooks for educational purposes.